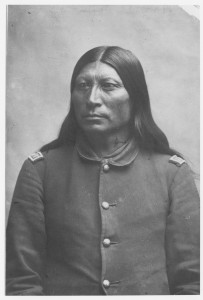 » Video Resources for the Classroom

Indians of the Greater Yellowstone

Jackson Hole and the Greater Yellowstone Region was never the tabula rasa that many believed it was. Nor was it avidly avoided by “superstitious” Indians purported to be afraid of its geysers and steaming cauldrons. Instead, we need to remember and recognize that it always has been a region held in high regard by Native peoples for many of the same reasons it is valued today – its extraordinary natural and scenic resources, spiritual presence and evidence of raw, creative powers. Native peoples have been here for millennia, still live in the lager region, and retain strong cultural ties to it:

The Mountain Shoshone or Sheep Eater Indians who lived seasonally in the high-elevation areas of the Greater Yellowstone Ecosystem (GYE), were often recognized as the only permanent residents of the area as a whole. They made extensive use of the hot springs and minerals found there; for example, they soaked the horns of Rocky Mountain bighorn rams in them to make their hunting bows. The Eastern Shoshone also traveled extensively through the southern part of the Greater Yellowstone Ecosystem including the Red Desert. Woman standing outside of Wall Tent In what is now the eastern part of Yellowstone National Park, the Crow not only had important cultural and historical connections to the region but they also had a strong presence. In fact, an 1851 treaty gave about three-fourths of what we now call Yellowstone Park to the Crows.

The Kiowa, Lakota and Cheyenne also retain ties to the area; the Kiowa Creation Story takes place at the geo-thermal feature in YNP now called ‘The Dragon’s Mouth’.

The Bannock and the Nez Perce migrated seasonally into the western part of the GYE. The Nez Perce engaged in hunting and raiding while in the region. The famous Nez Perce leader Chief Joseph is known for leading his people in their dramatic flight through Yellowstone Park in their tragic attempt to reach freedom in Canada.

Blackfeet, Flathead, Gros Ventre, Pend d’Oreille, and Kootenai habitually followed major native trade trails in the northern part of what is now Yellowstone National Park. The trails they used ran near sites that hosted their campfires at least 9,000 years earlier.