Morgan hails from a small colonial New England village (Old Deerfield, Massachusetts) where she participated in regular historical re-enactments and visited many house museums as a kid. Her “back-yard” experiences inspired her to pursue a career in the field of history, with a specific interest in experiential learning and the physical objects that illustrate the past. After earning her bachelor’s degree in archaeology from Brown University, Morgan moved out West for work and play. It was both the rugged landscape and enduring pioneer spirit of Jackson Hole that Morgan immediately felt connected to; a place she now considers home. For the past five years, she has been working as a cultural resource specialist at Grand Teton National Park, primarily focused on historic preservation planning, volunteer coordination, and project management.  She also has been actively involved in the Alliance for Historic Wyoming and the Teton County Historic Preservation Board, serving as an advisor and working on special projects. During this time, Morgan received her Master of Science in Historic Preservation from the University of Oregon.

Morgan was no stranger to the Jackson Hole Historical Society and Museum prior to joining the organization as the Executive Director in 2017, as she regularly utilized the research center, partnered on special events, and even helped out in the Deloney Museum for a month.  With a strong foundation in cultural resource management and a commitment to Jackson Hole Heritage, Morgan now oversees the organization’s programming, strategic planning, financial management, special events, and fundraising. When not at the Museum, Morgan can be found out on the mountain bike trails, ski slopes, or investigating historic cabins. Becky has a Bachelor of Science in Communication and is a member of the Association of Fundraising Professionals and is a Certified Fund Raising Executive by the CFRE International Organization. She has been a long-time resident of Jackson Hole and passionate about both the community and The Jackson Hole Historical Society and Museum (JHHSM). Becky has worn a fundraising hat for several local nonprofits during her career spanning several decades. In 1985, she launched a new department of philanthropy for St. John’s Medical Center. During her 22-year employment history with the hospital, she led two successful capital campaigns, developed the Foundation office and supported ongoing needs through grants, SPET and individual contributions. She worked as the Administrator for the Presbyterian Church of Jackson Hole and then served as the Director of Programs and Events for the National Museum of Wildlife Art.  When she is not working part-time at the Museum, Becky stays busy supporting her husband’s storage business.  She is also a past president of the Rotary Club of Jackson Hole and proud mother of Chunk, her labradorable. 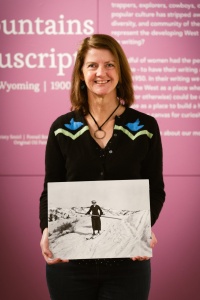 Raised in Lander and Jackson, Wyoming, Kirsten Corbett works as a storyteller and digital media communicator. She holds a degree in Modern Culture & Media: Literature & Society and specialized in travel literature. An obsessive reader as a child, she pursued that passion as an AmeriCorps volunteer to help co-found Teton Literacy Program (now Teton Literacy Center) and later work at Valley Bookstore and in Outreach and Communications at Teton County Library. While at the library, Kirsten oversaw adult programming and coordinated community and national exhibitions for eight years. Her love of words also led to work locally as an outdoor columnist and freelance writer for the Jackson Hole Guide. Following the library, Kirsten initiated and managed Center of Wonder’s arts calendar and blog, as well as collaborating on the community-wide arts marketing campaign Wildly Creative Jackson Hole in partnership with The Center for the Arts. She also served as the Marketing Director for the Art Association of Jackson Hole.

Kirsten has volunteered on the Teton Literacy Program and Cultural Council of Jackson Hole boards. In her free time, she studies and leads mindfulness meditation with Becoming Jackson Whole and writes at kirstencorbett.com. She thrives on being a parent, playing outdoors in the mountains, and constantly learning. Elizabeth grew up in a small town in southeastern Wisconsin, along the shores of Lake Michigan. With an eagerness to travel and explore more of the state, she enrolled at small liberal arts college in northern WI called Northland College. In 2015 she earned her BS in Environmental Geoscience Geology. During her time studying geology she realized her passion for history and understanding the hidden stories left in the rocks.

In 2014 she took a month long geology field camp course based in Wyoming, which brought her to Grand Teton National Park for the first time. She instantly felt a strong connection to the area and knew she needed to return. After college, she moved out west to Glacier National Park to start her career as a Park Ranger. In the following years she earned her Master’s degree in Environmental Education and continued worked as an Educator and Interpretive Park Ranger at Glacier. She then moved to Yosemite National Park to work as a Program Manager for a wilderness based youth program. Missing the cold and snow she finally managed to make her way back to the Tetons, where she continued her work as a Park Ranger in Grand Teton National Park.

Most recely, Elizabeth decided it was time to dive deeper into Jackson’s non-profit sector and give back to the community. She is excited to be learning the ropes in development at the Jackson Hole Historical Society and Museum. She is also excited to turn her love of natural history into love of all history by joining the team! Nora grew up in sunny Redondo Beach, California. With both parents as teachers, they were flexible enough to take long road trips across the country or travel abroad during the summer months—inspiring her interest in history and travel. For college, she decided to head north to get out of the sun and enrolled at the University of Oregon. She volunteered in the exhibits and programs at the Natural History Museum on campus and with a historic archaeologist. She participated in a reconnaissance archaeology field school for a summer in Belize and spent a fall semester studying abroad for her history degree in dynamic London.

After graduating with a BA in History and Anthropology Spring of 2013 she moved to Grand Teton National Park for just a summer job and got hooked. Since spending summers growing up doing trail maintenance in Glacier, hiking Grand Canyon and Yosemite National Parks, and scooping ice cream for a concessionaire in Yellowstone she decided that Jackson was right up her alley. While taking advantage of all the outdoor pursuits Jackson has to offer such as hiking, backpacking, running and skiing she decided that she wanted to be more involved in the valley’s unique history which brought her to the Museum in 2016. She is excited to continue working as a research assistant to help preserve the historic record of Jackson and continue to make it available to the public. Kim is a Wyoming native of the Star Valley area whose family has deep roots in the state. Even as a young girl, Kim had an interest in history and art. At eight years old, she tried to coerce her cousins into doing her own archaeological dig. They quickly lost interest, but Kim never did.

In high school, Kim completed an apprenticeship with a local artist and sculptor. Her skill in artwork allowed her to gain several scholarships to Wyoming schools, launching her college career. In college, she worked both as an artifact illustrator and cleaner of artifacts from Fort Laramie. In 2011, she graduated top of her class with a BA in Anthropology from the University of Wyoming. Her coursework included sailing on a historic ship, a square topsail ketch, out of Grays Harbor, WA, excavating on the Vore Buffalo Jump site out of Beulah, WY, and traveling to the Peruvian Andes.

In Cuzco, the ancient capital of Peru, Kim was fascinated with the way Quechua women still manufactured textiles for daily use. Already versed in several ways of creating textiles herself, Kim has since become a spinner of yarn and can be easily coerced into bringing her various drop spindles, spinning wheels, and weaving looms to living history demonstrations. To her, whether by drawing artifacts or creating artifact replicas using historically accurate techniques, the study of history allows her to have a tangible link to the past. Kim is passionate about bringing history to life and making it accessible to everyone. She believes amazing stories reside in history and can influence the present.

Kris greets Jackson Hole Historical Society Museum & Store visitors with genuine warmth and energy. Her knowledge of the area and friendly smile add to a wonderful visitor Museum experience for all!