“It’s a curious phenomenon of the great American West that if you toss a few men, horses and cattle together in close proximity, you’ll most likely have some sort of contest on your hands.” –Jackson Hole News, June 17, 1971.

Rodeo is as much a part of the history of Jackson Hole as the mountain man, dude rancher and every other character to enter and inhabit this valley. And it was the frontier spirit that fueled these contests of skill and will – making them a center piece of the town’s cultural heritage: “We’d bet a pair of silver spurs that “rodeoing” came to Jackson’s Hole on the day that the very first man trailed into the valley with all of his grub and worldly belongings diamond-hitched onto a packhorse.” quipped a 1971 article in the Jackson Hole News. By 1911, before the incorporation of the town in1914, the valley folk had already put together a genuine rodeo with grounds that would soon have a grandstand and racetrack.

The “Jackson’s Hole Frontier Rodeo” was held annually during the first three days of September. Two Jackson residents, Bob Crisp and Howard Henrie, were the top rodeo hands in those days – Bob is seen below, taking a nose-dive off a horse that lived up to its name of “Crumbling Ann”. “Rodeos have always been chock full of thrills.” he wrote; adding “ I never rode a bad horse, they always bucked me off !”

It was four early Jackson settlers that organized the informal contests that grew into the town’s legendary rodeo. All had business and ranch interests that motivated them to turn a casual bucking contest and get together into a real business proposition. 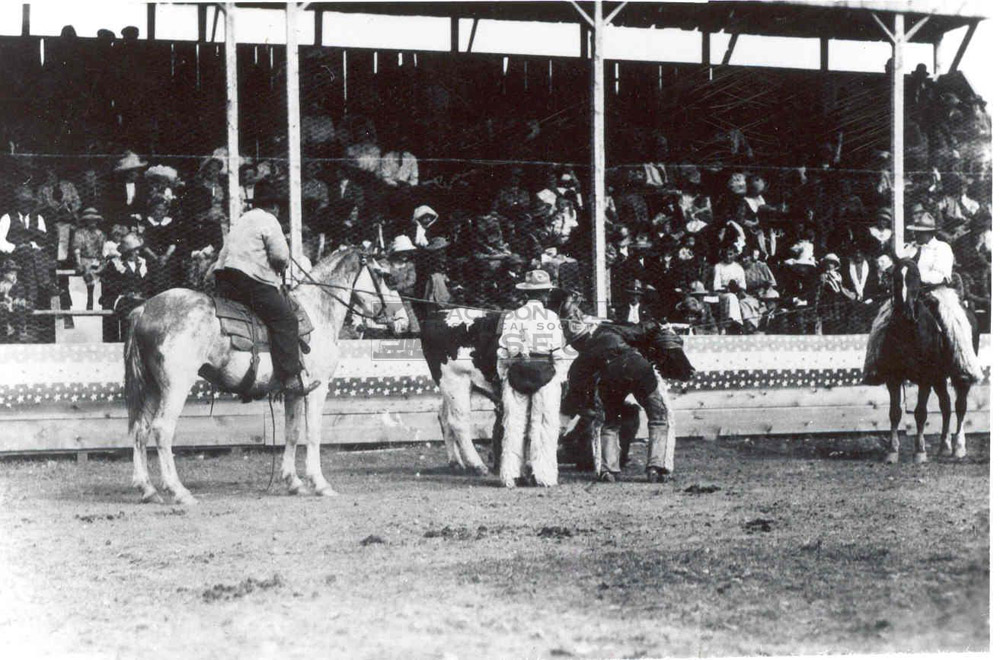 “Corrals were not used for saddling the bucking stock in these early rodeos. Buckers, either horses or steers, were roped in the big corral, dragged out in the middle of the arena and there blindfolded with a coat, sack or kerchief and saddled. The bronc rider mounted, got settled, then reached forward and pulled off the blindfold. They rode the bucking bulls and steers with a saddle. Old Spot, a bucking bull owned by the partners, was ridden very few times. He was famous all over the area where the partners took their show.” Walt owned the garage that housed the first Conoco and Chevy dealership in the valley, now the Jackson Hole Playhouse.

Clover was the rodeo clown who started the “Town Posse Show” – later known as “The Shootout” – the star of the show for many years, he delighted tourists and visitors with his creation of the Shootout’s lead character “Clover the Killer.” 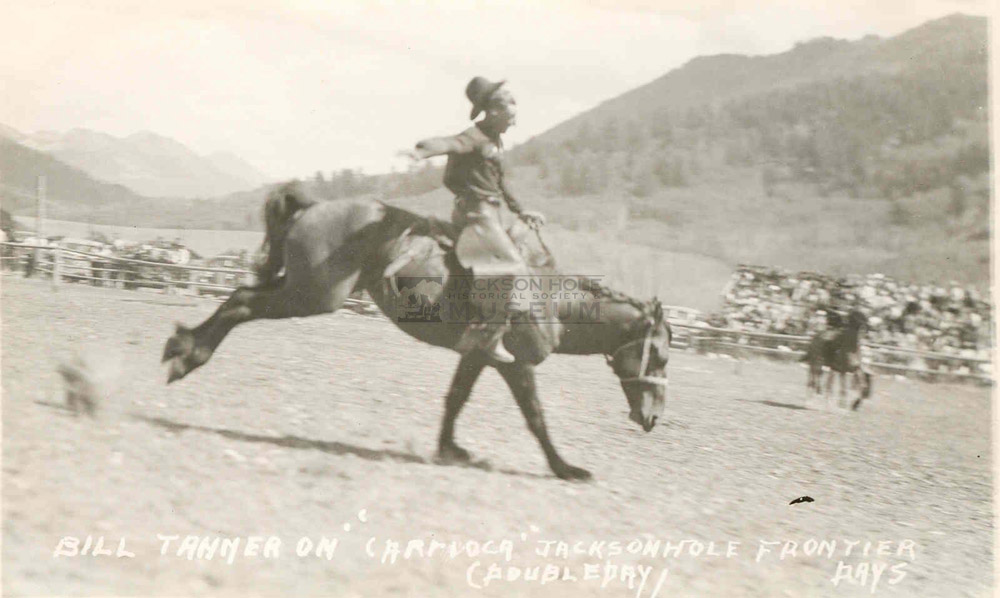 The more informal, rough and tumble setting of the first friendly contests entered a new phase of planning when Belle Flanders, John and Jess Wort’s sister, donated about 40 acres of land to the town for use as rodeo grounds. Today, this original location is found south from Broadway to the Center for the Arts and west to the Elks Lodge. These early rodeos were held the first three days of September and, according to Howard Henrie, “ranked right up there with Cheyenne Frontier Days and the Pendleton Roundup,” ( 1971 JHN interview). In the 1930s, following a legal dispute, Belle Flanders’s heirs reclaimed the property and the town purchased the twenty-five acres the current rodeo grounds now occupy. The town added an imposing grandstand and a judge’s station and the grounds were named “Frontier Park.”

By 1918 the rodeo was experiencing a rough patch. This wasn’t for lack of interest, but during the First World War many young cowboys had gone to work for Uncle Sam. It was also a blow to the business side of things when one of the original fathers of the Jackson Rodeo, T. Lloyd, moved to Alaska. Outside interests began to draw away other partners away and when the boys came home, the new American Legion was tasked with running the show. For 10 years the Legionnaires ran the rodeo, working hard and breaking even. When the responsibilities became too much, a rodeo company was hired to carry on the show. Over the years, several valley residents – all of whom had rodeo and ranching in their blood – owned and
operated the rodeo: it is to the credit of Walt Callahan, Bill Saunders, Hal Johnson, Bob McConaughy, Russ Moses and Philip Wilson that the rodeo was kept alive, a true celebration of a life and spirit that remains an important part of Jackson Hole history. Hal Johnson judging in the arena at Trail Creek, assisted by Ginny Huidekoper Bob’s McConaughy’s father owned the R Lazy S ranch, after his death, Bob and his wife Claire (pictured with sunglasses) ran the ranch. His ranching experience and ability as a horse trainer greatly aided in his success running the rodeo and it was he who was responsible for adding bull riding as a key attraction. Russ Moses and his son Gene

Russ was a partner to Bob McConaughy, thoroughly enjoying every aspect of the trade. A past president of the Jackson Hole Old Timers Rodeo – Russ competed in the sport for over 25 years. These gents currently run the Jackson Hole Rodeo. Here is a little history on this rodeo family taken from their website:

“Rodeo runs three generations deep in the family, starting back to Chet Wheeldon riding broncs in the rodeo before it was moved to Wilson. Uncles Chet and Chancy continued in their father’s footsteps riding bareback and saddle bronc horses. In 1976 Chancy earned a spot among the top fifteen saddle bronc riders in the world and a chance to compete in the super bowl of rodeo, the NFR. The Wilson boys and cousins followed as well: Bodee, Brandon, Shawn and Jason riding broncs while Buskin and Cody took the more dangerous route bull riding. Buskin finished ranked as high as 26th in the world bull riding standings. Not to leave the girls out, Karissa and Sadee barrel raced professionally winning several trophy saddles along the way. Philip meanwhile stuck to the business side of rodeo and worked as the director of the Wyoming High School Rodeo Association for twelve years, serving five as president and chairman. Phil now spends much of his time with the Wyoming Cowboy Church bringing the word of God to cowboys. The family still competes at the roping event at the Jackson Hole Rodeo.”

The Jackson Hole Rodeo still draws the crowds and is a beloved part of our valley’s summer season – we hope you’ve enjoyed the show!